Spinning Yarn has come a long way since it's historical roots. Even with it's more modern developments, the process and craft of spinning itself hasn't really changed throughout it's time. For thousands of years, fibre was spun by hand using simple tools, from stones and sticks to spinning wheels.

Before woven cloth, there was spun thread. Making spinning almost as old as civilization itself.

Spindles and spinning are also an integral part of the mythology and folklore of many cultures. Plato even likens the axis of the universe to the shaft of a spindle with the starry heavens as the whorl end of his Republic.

In Germanic and Teutonic cultures the three Fates spin, measure and cut the threads of life of mortals.

Even our modern fairy tales mention spinning, as in Rumplestilskin, Sleeping Beauty, and East of the Sun and West of the Moon.

© The Trustees of the British Museum. 1588 engraving published by Hendrik Goltzius Depicting the 3 fates.

In the beginning, there were Sticks & Stones

Most agree that the practice of spinning threads and yarns has been in existence for over 10,000 years.

Common rocks and Stones are some of the oldest 'tools' used throughout history for spinning thread. Archaeologists theorize that the first spinners were nomadic tribes from pre-agrarian societies. It's unlikely they would have carried their 'tools' from camp to another, and it's thought that they would use stones found at each new site for their spinning.  A leader thread would be spun by twisting the fibres between the fingers to the desired length, then this leader thread would be tied around the rock.  The rock could then be rotated to spin the fibres as they are played out between the fingers, much like a drop spindle.

Spinning with rocks is still done in remote parts of Asia among nomadic tribes. In fact, there's a fantastic video on Youtube by Julia Grey as she spins fibre using a stick & stone.

Whilst the spinning wheel is the most commonly associated with the art of spinning, it wasn't introduced to Europe until in the late Middle Ages.  Until it's introduction, the drop spindle was the primary spinning tool used to spin all the threads for clothing and fabrics. The Drop spindle has been used to spin fibre throughout the ages from Egyptian mummy wrappings to tapestries, and even the ropes and sails for ships, for almost 9000 years.

The first Spindles used were essentially a straight stick approximately eight to twelve inches long on which the yarn is wound after twisting. To begin with, the stick had a cleft or split at the top in which the thread was fixed. Later, a hook of bone was added to the upper end to hold the spun fibre in place.

The bunch of fibres were held in the left hand, and using the right hand the fibres are drawn out and the end fastened securely in the slit or hook on the top of the spindle. A whirling motion is given to the spindle on the thigh or any convenient part of the body. The twisted yarn is then wound on to the upper part of the spindle. And the process repeated until all the fibre was used or the spindle full. This is the exact same process we use today with drop spindles.

In combination with the spindle, a tool called the 'distaff' was commonly used to hold the fibres, leaving both hands free to work the spindle. A Distaff is a short stick with the raw material and fibre loosely wound around the end to hold out of the way

A spindle containing a quantity of yarn rotates more easily, steadily, and continues longer than an empty one; hence, the next improvement was the addition of a weight called a spindle whorl at the bottom of the spindle. These whorls are discs of wood, stone, clay or metal which are slotted and fixed onto the spindle.  The added weight of the whorls aids the spinner, allowing the spindle to be dropped whilst still rotating, thus allowing a greater quantity of yarn to be created before it had to be wound onto the spindle. This has lead to the more modern name of Drop Spindles.

© The Trustees of the British Museum. Made in Attica, Greece Circa. 490BC-470BC

The most common form of drop spindle used today is known as a hooked top-whorl spindle.  This spindle has the whorl located less than half the length of the spindle, with a hook at the top.  This type of drop spindle has been used since the twentieth century BCE in Egypt, where wall paintings depict spinners spinning and plying their yarns on hooked high-whorl spindles.

In the Invention of the Spinning Wheel

The earliest known artwork depicting a spinning wheel comes from China around 1270 and depicts a “wheel” with long bamboo spokes.  This wheel, as well as the Indian styles known as charkha wheels, were not rimed wheels at all but rather had a string running through holes in the tips of the spokes connecting them in a zig-zag fashion, thus supporting the drive band.  The drive band was connected to a spindle turned on it’s side where the whorl might be, and powered by a hand crank.  The spinner would turn the hand crank with one hand and spin-off of the end of the spindle with the other hand – thus the term “spindle wheel.”

While these rimless spindle wheels were in use in Greece, Yugoslavia, Bulgaria, Italy and Switzerland, they did not reach Europe until the late 13th century.

Oftentimes, these spindle wheels (with the exception of the small charkha wheels used in India) are called “great wheels.” The earliest known record of a flyer wheel appears in the form of a picture from southern Germany, dated from 1475-1480, and shows flax spinning.  Other pictures from the Low Countries dating from the early 1500s show small flyer wheels being used to spin wool.  Leonardo da Vinci himself even worked on the mechanics of creating a flyer wheel, as evidenced in his notes of 1490, but he did not invent the flyer wheel itself.

Just as with the spindle wheels, these flyer wheels were turned with a hand crank.  The treadle wheel, on which a foot treadle automatically fills a bobbin with spun yarn was an even later addition and improvement, but there seems to be little agreement as to their era of origin. With this development, a spinster could sit to spin as she worked the treadle with one foot, meaning an increase in production.

Most modern wheels are a version of the treadle wheel, but great wheels and charkha wheels are still used and available today. 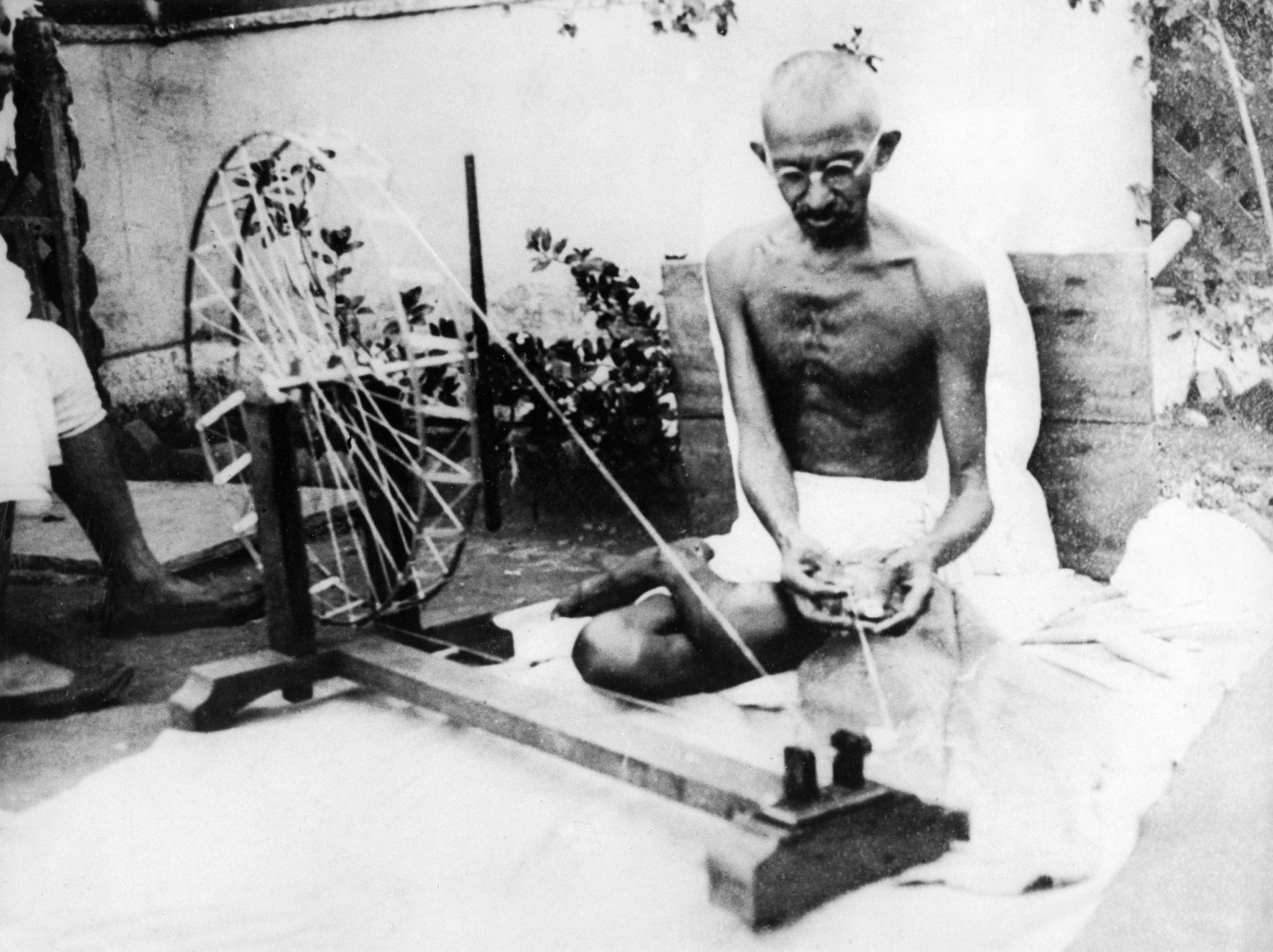 Sleeping Beauty and the Spinning Wheel.

Although the distaff and drop spindle continued to be used widely, during the 14th century the first spinning wheels, also known as muckle wheels were introduced into Britain.

These wheels had a fixed rim around the spokes, similar to the ones used today by hand spinners.

However, unlike modern wheels, the muckle was turned by hand.  As the wheel was turned, the spinster would step backwards drawing out and twisting the wool as she went. When the wheel reversed, she would walk forwards as the spun wool was taken in by the spindle. A spinster would walk many miles during her lifetime.

One advantage of the muckle wheel was that it could be home-made and was relatively cheap. However, the spindle, connected to the wheel with a band, consisting of a thin rod of iron with a sharp point.

As you can imagine, care had to be taken when adjusting the spindle to prevent injury on the iron rod. It is thought the muckle wheel is the original spinning wheel from the story, on which Sleeping Beauty pricked her finger.

The Origins of the Spinster

By the 17th century almost every home had a spinning wheel. Sometimes there were two, one for wool and one for flax ( linen ) Flax was used to make bedsheets tablecloths, napkins and towels. In medieval times, poor families had such a need for yarn to make their own cloth and clothes that practically all girls and unmarried women would keep busy spinning, and "spinster" became synonymous with an unmarried woman.

Hand-spinning is still an important skill in many traditional societies. Hobby or small scale spinners have increased in numbers over the last few decades with the increase in popularity for artisan crafts.

Within the recent past, many new spinners have joined into this ancient process, innovating the craft and creating new techniques. From using new dyeing methods before spinning to mixing in novelty elements such as flowers, threads and beads, that would not normally be found in traditional yarns, to creating and employing new techniques like coiling, this craft is constantly evolving and shifting.

Regardless of the method and device used, as long as you are twisting fibres together to create yarn, you are spinning.

You can get a good quality drop spindle for as low as £10 that will give you yarn just as good as you can get on a spinning wheel, which can cost you over £600 , depending on the wheel.  No matter how much you spend on your tools, or how historically accurate your methods, as long as you are creating yarn and enjoying yourself, you are keeping this once vital part of our history alive.

Fancy giving Spinning your own Yarn a go and learning some history, take a look at my 'Learn to Spin Your own Yarn: Drop Spindle Kit' in my shop.